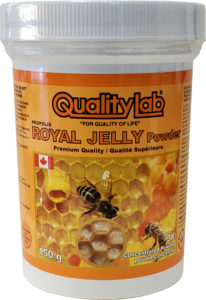 Recommended Dose: Take a quarter or half a tea spoon once or twice a day.

Storage: Store in cool and dry place. Avoid sunlight. Close tightly after use.

Caution: This product may result in anaphylactic shork for individuals with allergic reaction to honey, bee polen, beeswax or bee-derived products. Do not use if you are pregnant or breastfeeding. If athma symptoms are triggered, or if breathing difficulties occur, discontinue using this product and consult with a heath care practitioner.

The Most precious Nutrient from Canada!

The queen bee receives Royal Jelly throughout her entire life of about eight years, rules the hive and lays millions of eggs. Worker bees, on the other hand, do not receive Royal Jelly (except for the first three days of their lives) and live from only two to six months. The egg from which the queen bee hatches is identical to all the others. This fact has led researchers to the conclusion that her longevity is attributable only to its nutrition.

Royal Jelly contains some very potent substances which are directly responsible for the queen bee`s remarkable vitality. It has been shown to have a beneficial effect on the overall vitality of the human body as well, particularly the reproductive system. Royal jelly contains complete protein, natural carbohydrates, unsaturated fatty acids, and a variety of enzymes. It is also a rich source of pantothenic acid, nucleic acids, a variety of vitamins including B’s and minerals.

Royal jelly contains up to six times the amount of pantothenic acid (B5) found in brewer`s yeast and in the liver. Pantothenic acid has been able to increase the life span of laboratory animals by over 20%,  while at the same time, producing increased stamina and endurance. Pantothenic acid is also an antioxidant, a substance that prevents the abnormal oxidation of cells by destructive chemicals known as free radicals.

Royal jelly also contains between 18 and 22 amino acids, including all essential ones, (depending on the source of the pollen), resulting in a complete protein food. Royal jelly contains the Intrinsic Factor, a co-protein necessary for vitamin B12 absorption which is required for red blood cell formation and the synthesis of DNA and RNA. Wrinkling, adrenal gland dysfunction, and organ atrophy are conditions related to nucleic acid (DNA and RNA) deficiency.

The Most Beloved Nutrients in the World

Royal jelly is one of the most popular and beloved nutrients in the world, especially for those reaching middle age.

Feel the Power of Royal Jelly from The Pure Nature of Canada!